Not long ago, we were discussing a customer's technical issue here in the office. It seems that three of their Windows printers had gotten out of date, perhaps behind on driver updates or related problems. Anyway, when they scheduled a job in RPM Remote Print Manager® (RPM) to print to one of these devices, RPM suffered a failure.

However, the only symptom in RPM evident to the customer was that jobs weren’t printing. Further, they didn’t even know they had a problem with their Windows print drivers.

In our defense, the printer definitions were in such bad shape that if you selected one of them in a regular Windows application, Windows put up an error message that they were “driverless". We literally had never heard of this before, and I regret we don’t have a screenshot to share.

Nonetheless, it became instantly clear that we needed a better way of notifying the user regarding a category of more severe errors.

How to view critical events

In the user interface, go to the View menu. 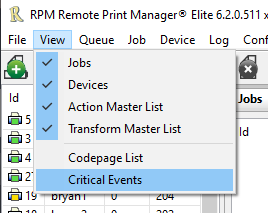 Here is a sample critical event dialog from a recent post:

The category shown is a descriptive term from RPM. The date and time in the second column are when this event was encountered. The message is an attempt to describe what happened. None of this information suggests that RPM itself had an error. Rather, something happened that RPM needs to report.

To remove entries from this list, select one or more and click "Delete". Until you do that, the messages will remain.

The premise for a critical event

In our view, what makes an event significant is that it affects the outcome of your job processing, and you should know about it.

A critical event may require intervention from the administrator. Typical measures would include a configuration change, such as updating the login credentials for a user account in RPM after it they updated it in the “real” world of the Windows domain.

Another critical event may warn you that job processing failed, but RPM will attempt it again, and maybe it will work the next time. For instance, if RPM warns you that disk space is low, but in the interim, someone manages the disk space, then a future retry may succeed.

Another critical event may warn of an exception. It may be our code failure or an unexpected error return from Windows (which happens).

How do we notify about critical events?

We used the event handling system in RPM that we use for nearly everything already. With it, we can generate an event, then create handlers in the code to do something meaningful in the context of that handler.

We set up a database handler that will write the critical event to a new database table we created, called “alerts.” If your database does not have this table for any reason, the handler will generate an event log message, so you’ll still get the critical event by opening the Event pane in the user interface.

Please note that we take every effort not to duplicate critical events, so if a device is offline, you should not get 10,000 messages about it in your inbox.

Finally, if the RPM user interface is running, it will pop up the Critical Events dialog. You can also use the View menu as described above.

What are the current critical events?